When Stephanie Lafond began her financial career at Mutual Life, the gender balance at her office was 50/50. She didn’t know then what an anomaly that was. “In 1993, that was leading edge. I didn’t realize until I left in 2005 how male dominant the industry was. I would go to these big meetings and the room would be 80 to 90 percent men.” A very recent report from Investment Executive Report Card currently has female Advisors across all channels at 20.6 percent.

Today, Stephanie is part owner of Limestone Financial Inc.,and Senior Financial Planner at the Limestone Team, at Assante Financial Management Ltd.” with offices in Brockville and Kingston, Ontario. While she’s seen many changes in the last three decades, the lack of women in the industry is not one of them.

Why so few women?
A 2020 report from the financial services consulting firm StrategyMarketing.ca lists some reasons why many women don’t pursue a career as an Advisor. Among them: the industry is male dominated, the pay is potentially unsteady, and there’s a perception that giving advice is based primarily on financial calculations. At the top of the list was that women didn’t think they had the skills required for the job.

Stephanie begs to differ. In her experience, many women are, by nature, ideally suited for a career in financial planning. “We’re compassionate and nurturing,” she says. “A lot of time in meetings, particularly with women, you talk about many different things that aren’t purely about the client’s investment or insurance portfolio. You certainly must be well-versed and wear that hat too, but you build the relationship by talking, listening and sharing about life with people.”

Talking a lot – an attribute Stephanie was disciplined for in elementary school – turns out to be something that helped her do well in her own career. “It’s just so interesting to see how certain childhood experiences and personality traits led to my success in this career: leadership skills, giving people direction and advice, as an instructor and lifeguard, hardworking and goal-oriented, as a top student and Canada Cord Girl Guide, and loving to have conversations with people all around me!” she laughs.

Conversations – especially about the many rewards financial planning has to offer as a career – is also one of the ways that could encourage more women to enter the industry. “Female independent Financial Advisors need to talk to other women about what a wonderful career this is,” says Stephanie, who has recently been having some good conversations about this herself. “The push is for 50 per cent but that seems like a huge hurdle to overcome. Lack of diversity and gender bias are still very real in our sphere.”

She notes it’s a great career for women who are starting, or anticipate starting, a family. When Stephanie was a new mother herself, she controlled her own schedule, so she could pick up her kids from school, stay home if they were sick or take holidays that coincided with the family’s schedule. Today, the kids are adults, but Stephanie’s schedule allows her the flexibility to help her aging parents. “It’s hard to keep going to your supervisor and asking for that flex time. And that’s huge for women who are, a lot of the time, the primary caregiver for children and older parents. In the right environment, much of the work that I do, can be done from home, given the widespread use of cloud-based technology, especially post-pandemic.”

That flexibility also extends to gaining the knowledge and designations required to become a Certified Financial Planner. In fact, the financial planning sector has, long before the pandemic, offered courses online, for self-study. And that’s a good fit for someone who is raising a young family and needs to work through studying on their own time.

Why women are good for the finance industry

Given the makeup of the financial services industry, half the population may be underserved. And that half wields a lot of power. According to Forbes Magazine, women control more than half the private wealth in the U.S. and make 80 percent of the purchases. Women will also inherit 70 percent of the $41 trillion in intergenerational wealth transfer expected over the next 40 years. Similar statistics have been reported in Canada, and given the choice, says Stephanie, many of these women would prefer to get financial advice from another knowledgeable, professional, and compassionate woman.

Stephanie recognizes that attracting more female Advisors is a challenge for most head offices, especially since advisors aren’t employees. “In my opinion, if an advisory team is going to move over to Assante, they’re not usually starting from scratch,” she says. “They’re coming from another dealer, where they have an established business. Given that it’s mostly men out there, mostly male teams will be transitioning over. So, I can see where it’s hard from a corporate perspective. But we need to start thinking outside the traditional toolbox, from a recruiting perspective.”

Interestingly, across their offices in the Kingston area, Assante does have a 50/50 split: I’m sure it’s one of the highest percentages in the country,” says Stephanie. Once you get a woman or two, they often attract other women, which is what has happened in our area.

Building a team with a focus on the future

Stephanie’s own team has gone from one man and three women to, currently, two women and three men. “We have to switch the balance back again,” she laughs. Beyond Stephanie, the Limestone Team includes Tom Shillington, Service Associate; June Donnelly, Business Associate and Licensed Assistant; Everett Childs, Financial Advisor; Rajpreet Singh, Marketing and Digital Communications; and Graham Milligan, Insurance Advisor. “Tom is in the autumn of his career. He’s looking to retire from an active advisory role this year and step into an administrative role, where he can work part time and remotely,” says Stephanie. “Everett is a junior Advisor. He will be getting a CFP designation, so with Tom stepping away, he and I will be the primary advisors for the time being.”

Stephanie has been deliberate in the way she’s structured her team. She’s ensuring there’s a succession plan in place, so the transition is seamless for both her team and their clients, when an Advisor decides to leave. “It happens all the time,” she says. “An Advisor just leaves. They’ve tried to find succession but for one reason or another, it hasn’t worked out. It’s really hard on clients.”

Knowing they could build a team is one of the reasons Stephanie moved over to Assante. “There are many Assante Advisors in Eastern Ontario. We can build relationships with them and hire younger people, sometimes even share employees. From these sources, and other progressive Assante programs, we’ve built a team so that, when the day comes, everyone is familiar with the clientele. You care about your clients – we treat them the way we would treat ourselves or our parents. It’s their money and I don’t want to leave them in the lurch. I inherited some clients where that happened, so I know how upsetting it is to be restarting those close relationships.”

Increasingly, Stephanie’s team is building relationships with higher net-worth families, and a new generation of clients, their children. “About 93 percent of an Advisor’s accounts will transfer out upon the death of a spouse,” says Stephanie. “If you want to keep your business healthy, you need to meet the spouse, and the next generation.”

She notes that some Advisors shy away from younger clients because the money that comes with them tends to mean small accounts. And that’s missing the big picture. At Limestone, where her team ranges in ages and experiences, her junior Advisor can take on a younger client who will, hopefully, grow to be a client for life. “Most importantly for us, philosophically speaking, is working with people who are both willing to pay for advice and to implement it.”

Outside of her practice, Stephanie finds time to give back to the community. An avid volunteer over the years, one of her latest ventures is as a committee member for the Southeastern Ontario Fund for Investment in Innovation (SOFII). The program offers loans to high-growth, innovative small and medium-sized enterprises, to help them face growth challenges. “One of the areas we are focused on is funding women-led businesses. I wanted to be a part of a committee that is helping to lift female entrepreneurs up.” 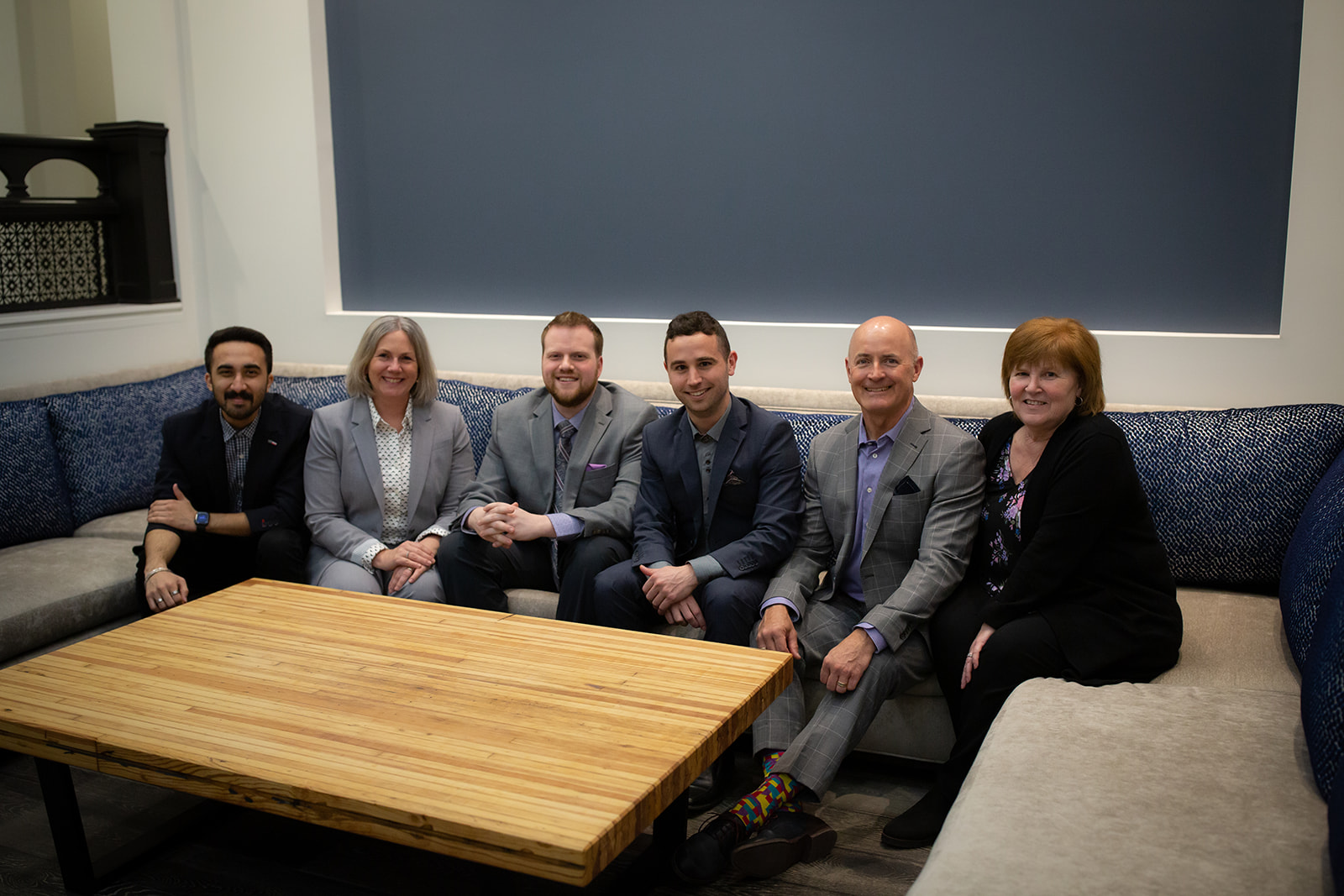